Service Civil International (SCI) is a  worldwide movement dedicated to promoting a culture of peace by organising international voluntary projects for people of all ages and backgrounds. Velebit Association Kuterevo is a partner of SCI in Croatia.

This year, SCI is running a climate justice campaign: Create a climate for peace. The biggest challenge of today´s world is climate change: a growing threat to peace, non-violence and human rights.  Our fossil-fuel based economy and culture of consumerism is contributing significantly to this process. Communities around the globe are already facing the consequences of climate change: draughts and famine driven by changing natural conditions cause escalation of existing conflicts (for example in Syria, Somalia), destabilisation of governments and disruption of social cohesion in countries that are already struggling with other challenges. It is expected that we will witness 200 million climate refugees leaving their homes by 2040. SCI, as worldwide, can have a impact in different areas, such as mitigation (reducing the footprint), disaster relief and in building resilience of impacts of climate change.

As part of the campaign, we hosted in Kuterevo in February a preparation meeting for Nonviolence needs nature project. This year, we will organised different activities part of this campaign, like join the Week of Action this week (see program below) and adjust all our workcamps to the goals of the campaign: sustainable activities, challenging educational part and contribution to climate justice. 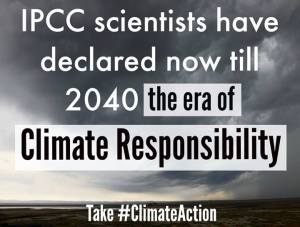 One focus of the latest report from the Intergovernmental Panel on Climate Change (IPCC) is the impact on Earth’s ecosystems. The report says that in recent decades, many plant and animal species have moved their range, changed numbers or shifted their seasonal activities as a result of warmer temperatures. Hunters in Croatia has already witnessed “spring advancement” earlier breeding by bears, which is supposed to happen in May or later. Researchers are finding that changes in a region’s climate are affecting hibernation behaviors around the world. The three main triggers that activate hibernation behaviors in an animal include changes in air temperature, food availability, and day length (also called photoperiod).

For example, in Spain, scientists have found in recent years that a European brown bear species that inhabits the Cantabrian Mountains no longer hibernate during the winter months. Mother bears (sows) and their cubs have remained active due to warmer conditions and the ability to find abundant food resources year-round.

In general, the reports says that the world faces threat to food supply, conflicts over water rights and growing inequality. The only option to is cut emissions and to adapt to the unfamiliar changes of climate.

This week, from 7th till 13th of April, we will be organizing in Kuterevo different activities related to climate justice and sustainable living.

Every evening at 8pm we will be screening documentaries in the volunteers’ station. Don’t hesitate to join us! For more info, contact us.

1 thought on “Create a climate for peace”