For some people 20th of August was just another ordinary day but for us, 9 volunteers
who had the opportunity to be a part of Bear Art 3 Work-camp, that day was the beginning ofnew experiences, adventures and friendships.

Our work was a lot different from the work of other volunteers because it was focused
on art connected with bears. We came as “artists” so everyone had different ideas about what we should do, but we managed to make a compromise surprisingly easy. Instead of one big project we decided to do a few smaller ones depending on each person’s interest and we helped each other out. 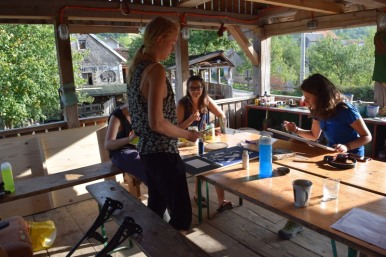 For example, we made a few signs that were not yet there and a wooden book about
Kuterevo village and bears in the refuge. Photo-place was a real success because people were intrigued by colorful bears even when the project was not even finished yet! And prints of bear paws on the road turned out to be really helpful; both for tourists, who didn’t know where to go and for volunteers working at info-station, because their work became a lot easier with saying “just follow the bear steps” to visitors. 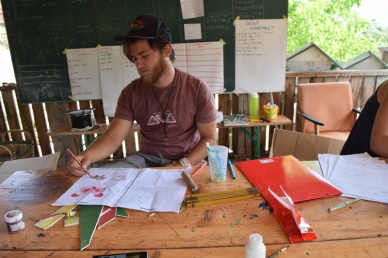 But we weren’t just drawing and painting, we also had a chance to feed the bears,
explore the village and for example meet a lady who makes special traditional shoes typical for Kuterevo, we also had a little tour through the village and learn a lot of information about nature in that part of Croatia. We also learned stories of bears and some of them are really touching. We tried to spend as much time as we could admiring and observing these magnificent animals and we were having fun guessing which bear is which.

For one day we also went to camping place Kopija where we proudly became
Kuterevo volunteers and had a little party for ourselves, baking potatoes, exchanging funny
stories, making fun of our accents and there were a lot of failed attempts of singing but
even the youngest among our group was enjoying himself.

We also quickly adapted to the simple living conditions and realized that you really
don’t need much to be happy – we probably did break a few records in taking the quickest
showers ever because of the cold water and every day was full of surprises, especially when it came to cooking. Gordon Ramsay probably wouldn’t be impressed, but hey, we are artists, not cooks 😉 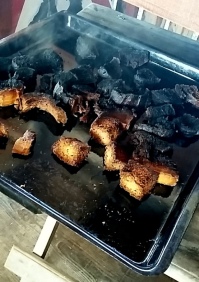 And then came that day of goodbye’s, handshakes, hugs and even some tears. We
were all a little sad because it was already over and it seems that time really flies when you are enjoying yourself. So, we were people of different ages coming from different parts of the world, we had different backgrounds, spoke different languages (thank you Google translate), and had different personalities, but nevertheless, we all came with the same purpose to volunteer and at the end we left Kuterevo as friends with beautiful memories. 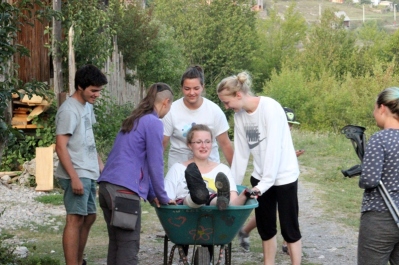